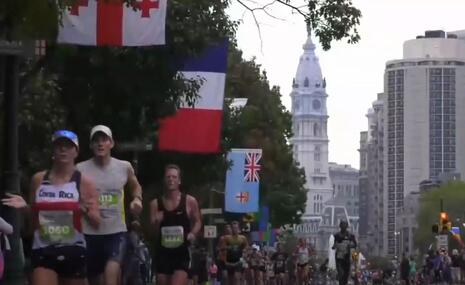 Male and female gender divisions are seen as far too restrictive in the Philadelphia distance running scene. The solution? A famous half-marathon is re-inventing itself by adding a non-binary division to the competition. And encouraging this to become a trend nationally.

The Philadelphia Distance Run (PDR) used to be one of America’s premiere distance races, drawing Olympic caliber runners. It was considered the world’s fastest half-marathon, and world records were set there by men and women. For the past decade, it was known as the Rock ‘n’ Roll Philadelphia Half Marathon. It’s returning Sept. 19 as the PDR and adding a non-binary division, to make the race as inclusive as possible, reports Philadelphia ABC News’ George Solis.

The mentoring group Students Run Philly Style’s executive director Andy Kucer asked an LGBT colleague, C.C. Tellez, for advice on how to make the race more inclusive. They hatched the non-binary idea, and it flew.

“We’re looking at every angle of this race from an inclusivity standpoint, and making people feel included is so important to the character of the race,” Kucer said.

PDR organizers say this will be the first road race in the U.S. to establish a non-binary division up to the elite level of competition. Call it a cultural low mark, as it may well spread to other sporting events.

The Left is footloose with glee over the new LGBT inclusiveness.

“Time has come, and it needed to be done,” Philadelphia Runner owner Ross Martinson told Solis. “The feedback has been entirely positive so far.”

Jessica Wayashe, a Philly running coach and personal trainer, says this race is too big to confine itself to traditional restraints.:

““it shouldn’t be, ya know, just kind of narrowed in on whether or not you’re male or female.

“It’s monumental and something that I hope a lot of other organizations and cities will adapt into the way they celebrate their runners.”

Solis concluded his video report by saying organizers are hopeful the PDR is just that and more.

Runners World magazine writer Emma Zimmerman says this news matters significantly. She pointed to PDR as an opportunity to establish a precedent “for gender inclusion in the running community.” PDR aims to again become the iconic event it once was and “to place equity and inclusion at its core.”

Registration for the Philadelphia Distance Run is now open to men, women and people who (according to Healthline) experience their gender as both, or neither, male and female. The celebration of gender confusion grows by the day.

Must Read: End of an Era: The Rush Limbaugh Show Shuts Down

Must Read: Juneteenth highlights the gap between rhetoric and reality about who’s actually ‘free’ in America

Must Read: Because sometimes, it’s just too hard to wait until the morning

Hot on sport: Jude Bellingham’s record as youngest ever European Championship player is broken after just six days as Spain falter yet again in draw with Poland