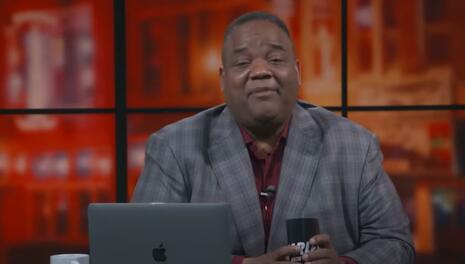 ESPN’s television coverage of Saturday’s UFC fight between Connor McGregor and Dustin Poirier blacked out former President Donald Trump’s arrival to a rousing reception by fans. Jason Whitlock says it has everything to do with ESPN waging a “cold war” with traditional sports fans.

When Trump walked into the arena, the crowd erupted with chants of “USA! USA! USA!” Someone wasn’t thrilled, though, as Whitlock (appearing in photo) explained on his Fearless podcast.:

ESPN ignored the whole thing. They never mentioned that the former president was in the building. The Worldwide Leader followed the guidelines prescribed by Facebook, Twitter, and Instagram. America’s social media apps disappeared the 45th president. Like an obedient soldier, ESPN did, too.

Whitlock said that for almost a decade, “ESPN has waged a Cold War with traditional sports fans.” ESPN’s parent company, Disney, along with Silicon Valley social media apps, have “done everything in its power to infuse patriotic sports fans with anti-American sentiment and bitterness.”

UFC fans are the people who don’t look down on Trump as a pariah like Big Media and Big Tech do. They don’t buy into the Jan. 6 “insurrection” narrative created by CNN, MSNBC and the Democrats. ESPN is a big part of the left-stream crowd, despite hollow denials that it is not a political organization.

Trump friend and UFC president Dana White is the antithesis of the NFL, NBA and Major League Baseball, whose commissioners “would run from Trump as if he were a pack of Wuhan bats,” Whitlock added. He’s more like former NFL Commissioner Pete Rozelle, who marketed the league in support of traditional American values. Now, though, NFL Commissioner Roger Goodell guides the league in a polar-opposite direction.

ESPN is one of many U.S. corporations bent on antagonizing the customers. Whitlock criticized the network’s “zero concern” for giving customers what they want. Everyone knows Barack Obama would have been highlighted to the hilt if he had attended UFC 264. Unlike Trump’s actual appearance there, Obama would have been interviewed by ESPN.

Whitlock pointed out that in ESPN’s early years, it would have paid a “swift and deadly price” for treating its customers so poorly. Not now, though, because “the checks and balances of capitalism have been undermined by China’s economic influence and the modern monetary theory of endlessly printing money.”

In fact, “bad guys” like ESPN, totally partisan in their political leanings, are winning what Whitlock called the new cold war.

Must Read: Carl Heastie: The Man Who Would Oversee Cuomo’s Impeachment

Hot on sport: VAR, handballs, offsides and heading to change